In the previous chapter, you began learning how to organize your tests in separate files, each with its fixture, to set up the tests in a consistent manner.  Identifying your tests and grouping them by a common theme, like the functionality under test, helps with the long-term maintenance of your test suite. You'll know where your tests are, and anyone can have a birds-eye view of the test suite by glancing at the test results.

Since all the existing tests have to perform the same steps to log in before running the code for validating the Feed section functionality, you can move this logic to a single place to keep your tests tidy and organized. With TestCafe, you can use hooks to write your setup and cleanup tasks, so you don't have to write the same code repeatedly across different tests.

In this chapter, you'll learn about the different types of hooks included in TestCafe. Then, you'll put this knowledge into practice by refactoring and organizing your existing tests.

While building your test suite, you'll often find yourself needing to perform some initial setup before your tests run, so they execute successfully. You may also need to run a few tasks after the tests finish to ensure future test runs start from a clean slate. You can write the functionality to complete these tasks before and after each test, but you'll find yourself with lots of duplicate code and a maintenance nightmare.

Instead of trying to manage extra code, you can apply hooks to keep your tests manageable. Hooks are functions that allow you to run code before a test or a group of tests begins to run. You can also use hooks to execute code after a single test or a group of tests completes its test run. Keeping the same initialization and cleanup tasks separate will help keep your tests short and focused on what it should validate.

TestCafe has two kinds of hooks for you to use, each helping you in different situations.

The first type of hook functions provided by TestCafe are test hooks. You can use test hooks to define a function that will run before and after test execution. Test hooks are the ideal place to write any setup or cleanup code your tests need to keep your scenarios organized and consistent. A few common uses for test hooks in TestCafe are:

You can define a test hook either when initializing a fixture object or a test object. Both of these objects expose different methods to allow you to set up the hook.

On a test object, you can use the before method for any process you want to carry out before the individual test begins to execute, and the after method for defining code to run after the test finishes up. Typically, these methods are used for overriding the beforeEach and afterEach methods described in the fixture.

Besides the different method names, defining a test hook is identical for both fixtures and individual tests. The test hook requires an asynchronous anonymous function containing the code to use for the initialization or cleanup. The function includes TestCafe's test controller as an argument that allows you to access and use TestCafe's testing API. These functions are similar to defining a test case using the test function, so they will look familiar to you:

A common mistake when using the beforeEach and afterEach functions is including too much functionality that executes before and after every individual test under the fixture. If you include more than you need, you risk your test suite running slowly and inconsistently, making it difficult to debug any issues that arise due to the extra code.

An example is if you have a test hook defined for a fixture that logs in a user. In the beforeEach function for the fixture, the test goes through the user login process, which takes a couple of extra sections before the test begins. However, if you have a few tests under the fixture that don't require a logged-in user to execute the test successfully, you and your team will waste plenty of time waiting for the test suite to perform actions it doesn't have to do every time.

Prevent your tests from slowing down by only including what you need in the beforeEach and afterEach functions, and splitting up tests into separate fixtures when required. Even if you only have one or two tests in a fixture that don't need to execute the test hook, it's worth fixing the problem as soon as you can so it doesn't get worse as time goes on.

Besides executing code, test hooks allow you to share information between the hooks and the tests. You can use this functionality to grab any information from the actions performed in your test hooks, store it in a variable, and use that variable inside any of the fixture's tests. It's useful when you carry out an action before the test starts that returns data required in the middle or after a test run.

Here's an example showing how the test context object works when using test hooks for a fixture:

You can also assign data to the test context object inside an individual test. However, keep in mind that any assigned values in this manner are valid only for the test where the value gets defined in the test hook. You can't access any data or properties from a local test context object in another test case, as shown in the example below:

You can also override the values of existing properties for a test context object in test hooks for both fixtures and tests. However, if a test case doesn't override a property, it will use the assigned value from the fixture test hook:

Using the test context object is useful in many cases. For instance, you can grab some information during initialization that you need to use later, like reading from a third-party API or saving a piece of information from the page at its existing state. You can save that information as a property in the test context, and easily read it later when you can use it for your tests.

One thing to keep in mind is that test hooks for initializing your tests - beforeEach for fixtures, before for test cases - run after TestCafe loads the starting page for the test. It allows you to have access to the initial page and perform any necessary actions on the first page that loads in the test. You can interact with the page in the same manner as you do when writing tests.

This functionality is useful if you want to save any information about the application's initial state, which you can use store in the test context and use later in your tests. However, it can also introduce confusion if you change the initial state in the test hook and don't expect it in a test. For instance, if you perform an action that changes the page in any way, it will remain in the altered state when the test run begins., which may cause confusion if you're expecting the initial page you defined in the fixture.

You can define a fixture hook when initializing a fixture object by using the before method. The method definition is similar to the beforeEach test hook, requiring an asynchronous anonymous function containing the code you need to execute. The main difference with fixture hooks is that the function doesn't include TestCafe's test controller like it does with test hooks. Instead, the function gives you access to the fixture context.

Fixture hooks can run alongside test hooks. The code defined in fixture hooks will execute before and after any defined test hooks in the fixture:

Fixture hooks share the same method name with test hooks for individual tests. It's easy to confuse these methods when writing tests, so double-check which kind of hook you need for your fixtures when defining them.

Fixture hooks also allow you to share any data between the hooks and the tests belonging to the fixture. Any properties assigned in a fixture context become accessible in test hooks and individual test cases. However, sharing data between a fixture hook and a test is slightly different than when using test hooks, since you won't have access to the test controller object.

The context provided by the function defined in the fixture hook works similar to using t.ctx for the test context object seen before with test hooks. You can set new properties to the object and retrieve any assigned value at a later time. The difference is that you can now assign properties directly on the fixture context:

Since test hooks also have access to the same test context object, you can access the fixture context in the same way:

You can override fixture context properties inside test hooks and test cases. However, it's more useful to assign a property to the test context object instead of replacing the value in the fixture context. 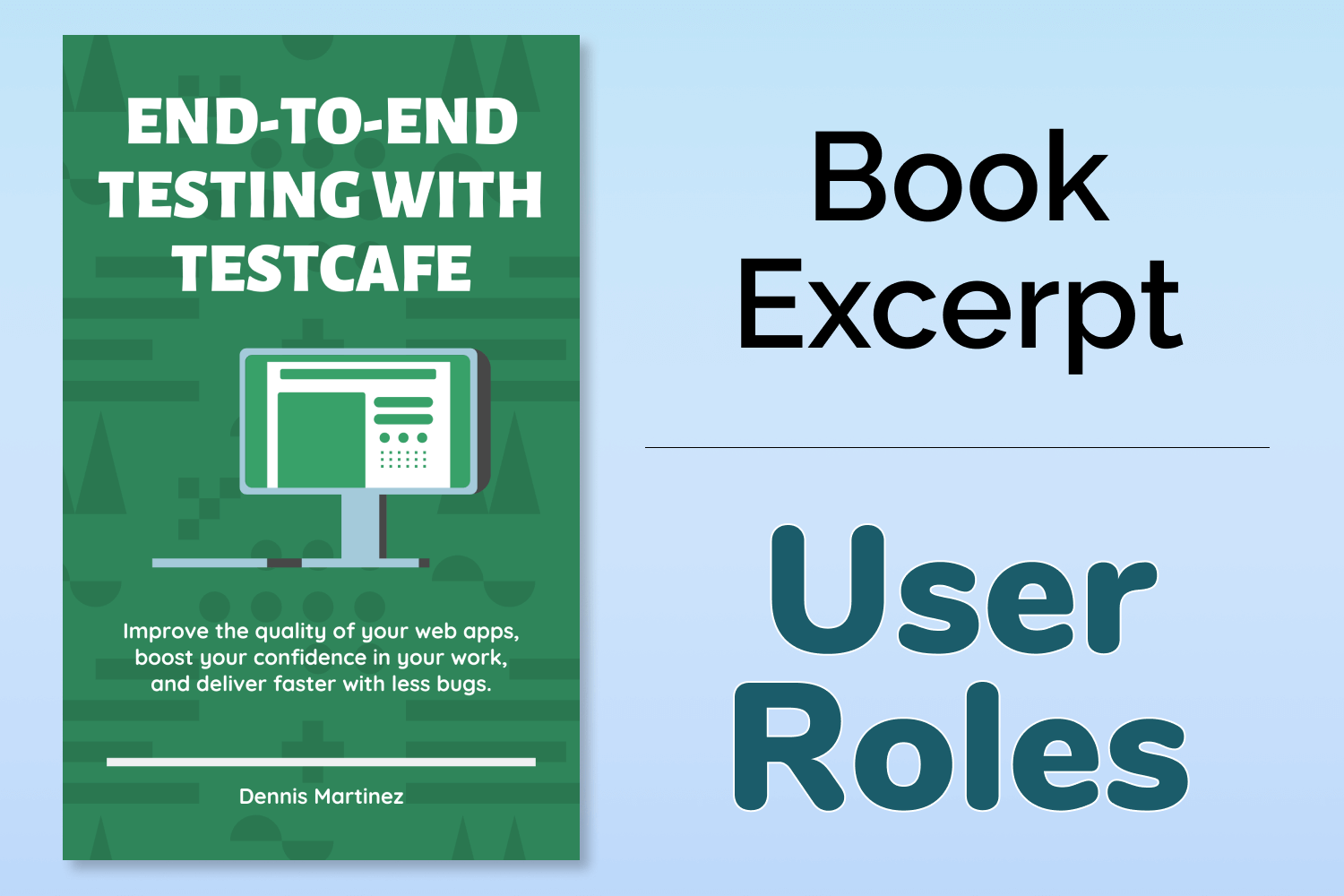 Learn about TestCafe's built-in roles mechanism to handle authentication, and how it can help you organize and speed up your end-to-end tests. 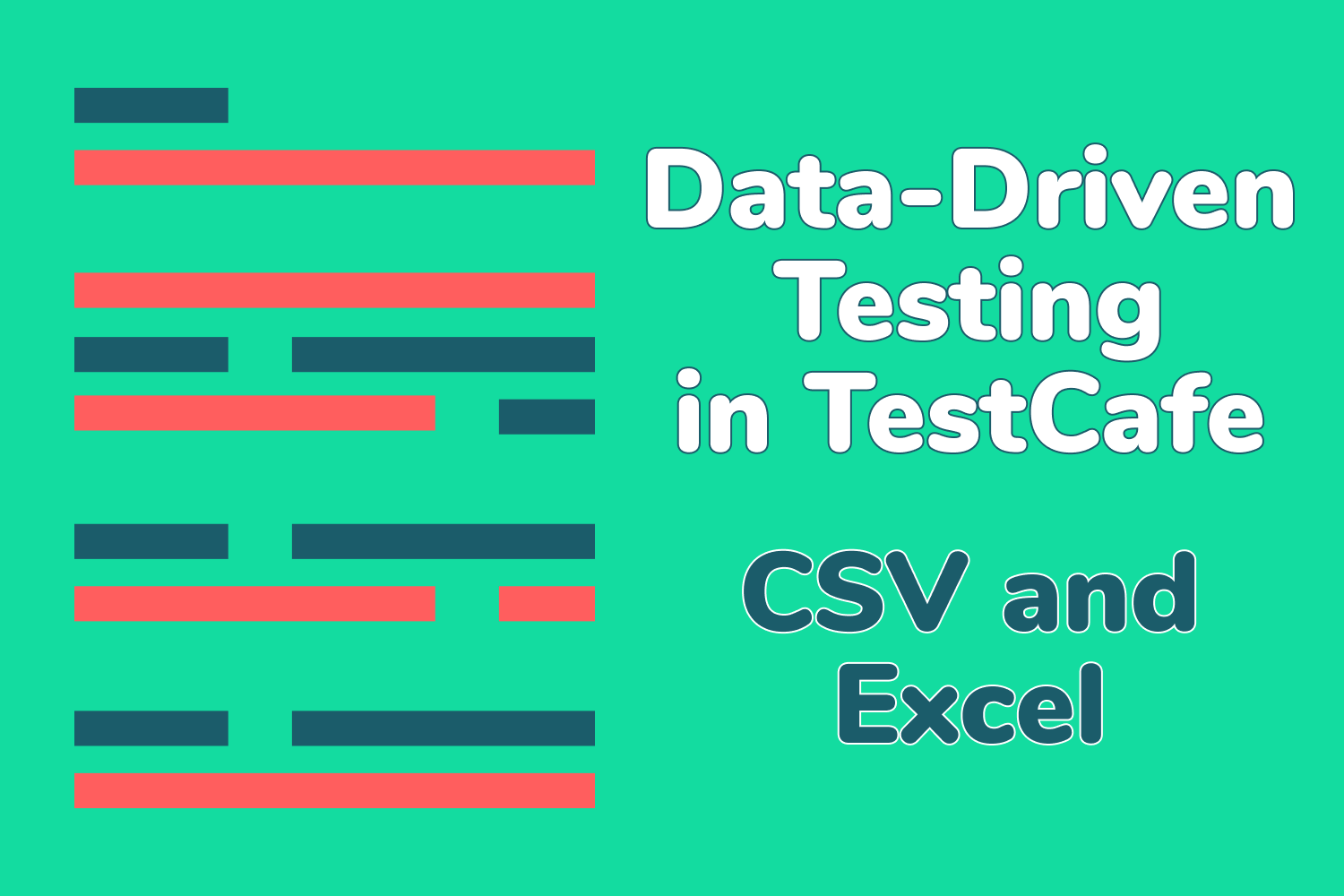 Learn how to use CSV and Excel files to drive your TestCafe tests in the second part of this series.